This post is ridiculously late. We were in Mozambique in February, but I never found time to write about it before now. As Zimbabwe, especially Mutare, were so quiet, a venture into a part of Mozambique I had not been to and where David spent most of his school holidays, seemed like a great idea.

After a rather short, yet annoying process of obtaining our Mozambique visas at the consulate in Mutare, we were on our way the next day. Needless to say, the official dealing with us had not dealt with an Estonian before and maps were brought out to locate and confirm this is a country and it does indeed exist on the map. I thought David might have the same problem in Estonia, but one infamous dictator and everything that goes with his policies has made Zimbabwe rather well-known in  all parts of the world. It is understandable, however. There are a lot of countries in Europe and us Estonians in the verge of Europe think we are all the rage in the world due to our technological and government advancements, but in the spirit of bursting bubbles, it is not so.

Anyway, back to Mozambique. We were taken to the border crossing by a friend and crossed into Mozambique on foot along with border hoppers, questionable businessmen and people who lead a cross-border life: working in Zimbabwe and living in Mozambique or vice versa. The crossing was like last time. An official had a large tattered ledger book, where he hand wrote our details, checked the validity of our visa, looked intriguingly at my passport from an imaginary country, and we were free to go. David of course had to smooth the process with some Shona chat and calling everyone ‘aunty’ and ‘uncle.’ As always, it helped.

As soon as we got to Mozambique, we were met by local entrepreneurs, calling us murungu and offering the ‘very best exchange rate for Mozambican Meticais’ (100 Meticais = about USD1,3). We refused their kind business proposal and opted for a cash machine later on. Another thing that immediately caught my eye was a large presence of road and construction works, which were carried out by locals working for a Chinese company, who were given orders by a Chinese boss in a mixture of Chinese, Portuguese and English. As I was in the middle of writing my MA thesis on Chinese alleged neo-colonialism in Africa, I was intrigued. We tried to make conversation with the manager in Chinese, but his accent was very difficult to understand. He was also probably perplexed by a couple of murungus at a small borderpost conversing in Chinese. We did find out that they were renovating the road from Mutare to Chimoio, which is the closest big town, where we were also headed. We did not find out if this road leads to any significant resources, but I am almost convinced that it does. 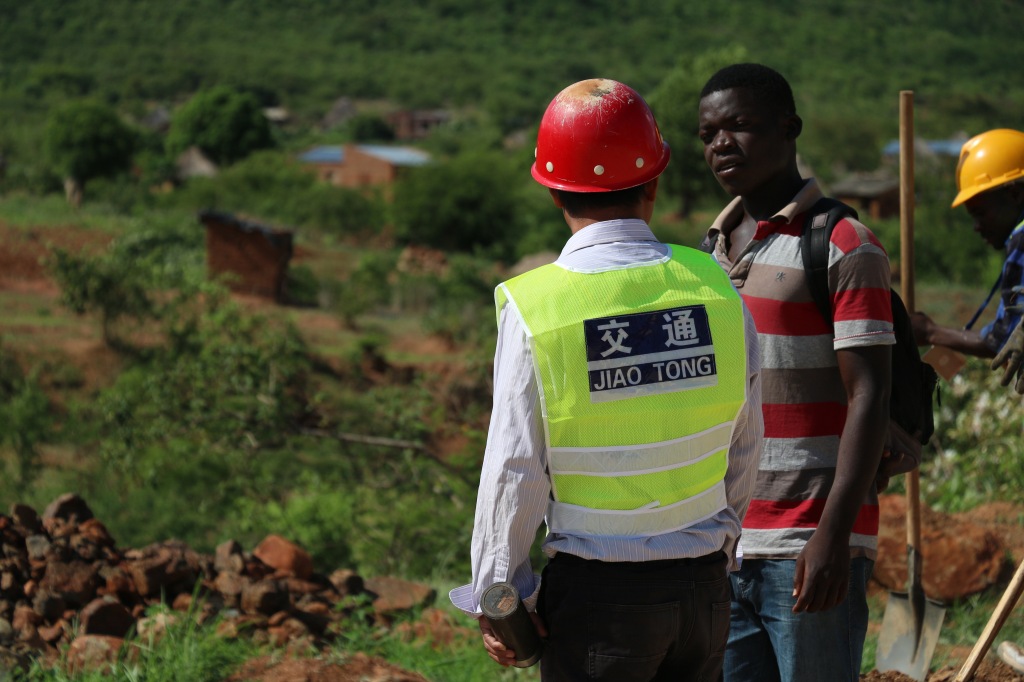 The locals labouring on the road seemed happy enough to have employment. I don’t think the Chinese manager was very happy to have been posted to such an unglamorous place, though. The Chinese presence was very obvious throughout our journey to the Mozambican coast. We saw chicken farms, warehouses and timber companies with Chinese signage; whole residential compounds in the middle of nowhere complete with Chinese architecture and no doubt many Chinese families behind the heavily guarded gates.

As we waited for David’s buddy Bruno to pick us up, I tended to my already burnt nose as I was looked on by local village ladies.

Bruno soon came racing down the road and went straight past us, not even noticing the murungu sitting by the side of the road. He soon returned and we were on our way to Chimoio. It suddenly became much clearer why that road was being refurbished. As we drove slalom at 130 kmph past villages full of mud huts missing every passing car by mere centimetres, I decided it best not to pay attention to the driving or the road and focus on the beautiful scenery all around.

Bruno on the left and David. On our way back we stopped in a tiny little town called Manica, where nothing seems to happen, but which apparently was (and still is?) a major trading spot for illegally mined diamonds from Zimbabwe.

Once we got to Chimoio and I had had an excursion of David’s old stomping grounds, we went to look for a car to hire to take us to the coastal town of Vilanculos. The car hire turned out to be a bit of a pain – story of our lives while travelling in Africa. We found out that hiring a car is extremely expensive. More than 4 times the price we would pay in the UK, for example. However, with the roads in an appalling condition, one needs a large car, which costs a lot of money and needs a lot of repairs after going through thousands of pot holes.

Our 7-hour drive to the coast was mostly on Estrada Nacional 1. The number one road in the country with number one quality pot holes – bigger and better than anywhere else I have seen. We also noticed a lot of burnt cars by the side of the road – the aftermath of fighting between the main political opponents. Renamo, responsible for most atrocities during the country’s long and horrific civil war, which has not won an election since the peace agreement in 1992, but always came second; and Frelimo, the ruling party. Renamo always retained a rebel army on the grounds that ‘Frelimo did the same.’ The warring parties have sparked up intermittent conflict again and again since 2013. Not surprisingly, the ruling party is accused of benefitting the ruling elites rather than the citizens of the country, which has meant Renamo has remained rather popular. Looting, burning of villages, rape and murder are largely attributed to the government forces. Again not surprisingly, the government mouthpieces attribute the violence to Renamo rebels. The truth, as always, is somewhere in between, but like so many conflicts in the ‘non-strategic’ areas of the world, this one also remains underreported. There are tens of thousands of Mozambican refugees who have fled to neighbouring Malawi and fighting on a small scale continues.

These burnt trucks and abandoned villages are a testament to the fighting that took place only weeks before and after we drove down the road, which separated Frelimo supporters from Renamo. Another remnant of the fighting during the civil war was ditches running horizontally through the road in an attempt to cause even more havoc. So, needless to say, the 7-hour drive on that road seemed very long and bumpy. There have been reports of mass graves found in Mozambique since we left, civilian buses have been attacked and looted, whole villages demolished. Yet nobody is clear of the real cause for this fighting. I suspect the usual power struggle, tribalism and people’s unwillingness to accept the loss of power on that beautiful continent.

The poverty in Mozambique is much more striking than in Zimbabwe. It is in fact very obvious and always in your face, even when basking in the sun at a fancy resort. Yet somehow it seems that things are looking up and people generally have more hope than they do in Zimbabwe. I had the same feeling the last time we were in Mozambique 3 years ago, but as Zimbabwe was in such a bad state this time, the contrast and difference in mood was very striking.

We had just missed the tourism season in Vilanculos, so we enjoyed a very relaxing time at this seaside paradise town. Of course we visited the local market to familiarise ourselves with the offerings: seafood, nuts, vegetables and anything second hand.

I bought some beautiful fabrics from this fan of Lindsay Lohan and looked like a proper tourist while David unintentionally shared all the bread we had bought with some local cool dudes. 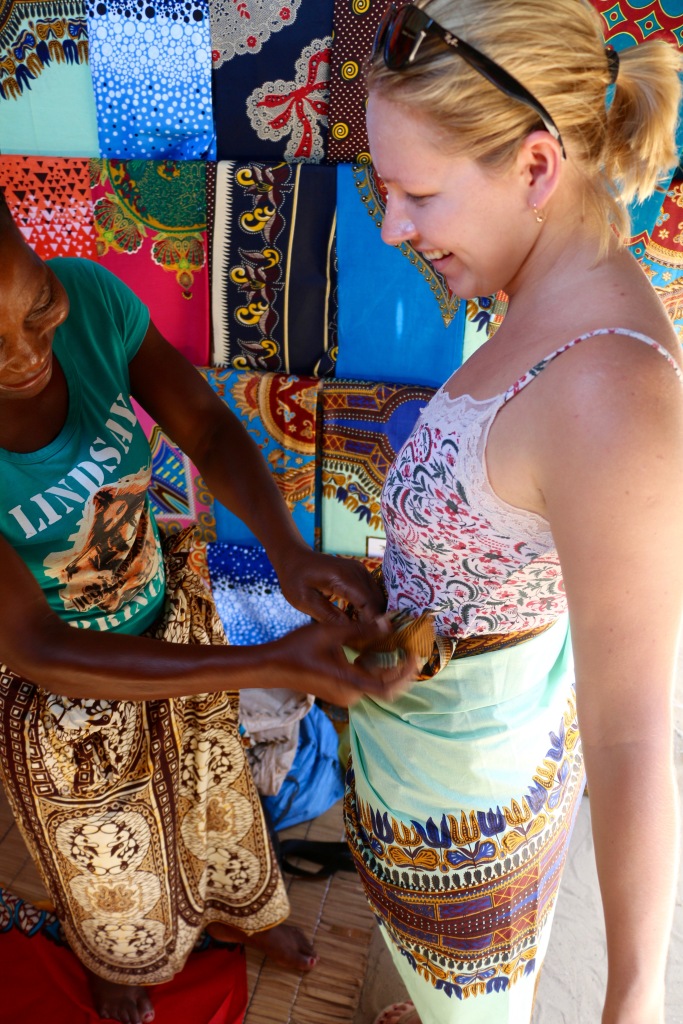 My daily dinner – giga prawns with lemon and butter, freshly caught from the ocean just metres away.

The turquoise waters of the Indian Ocean with fishermen in their dhows was the view from our room. We didn’t really get to swim in the sea as the tide went way out there for most of the day and that water was pretty warm anyway. We did take a boat trip to the island of Magaruque, which is a tiny place where almost nobody lives. It took us 2 hours to walk all around the island and get burnt like never before. 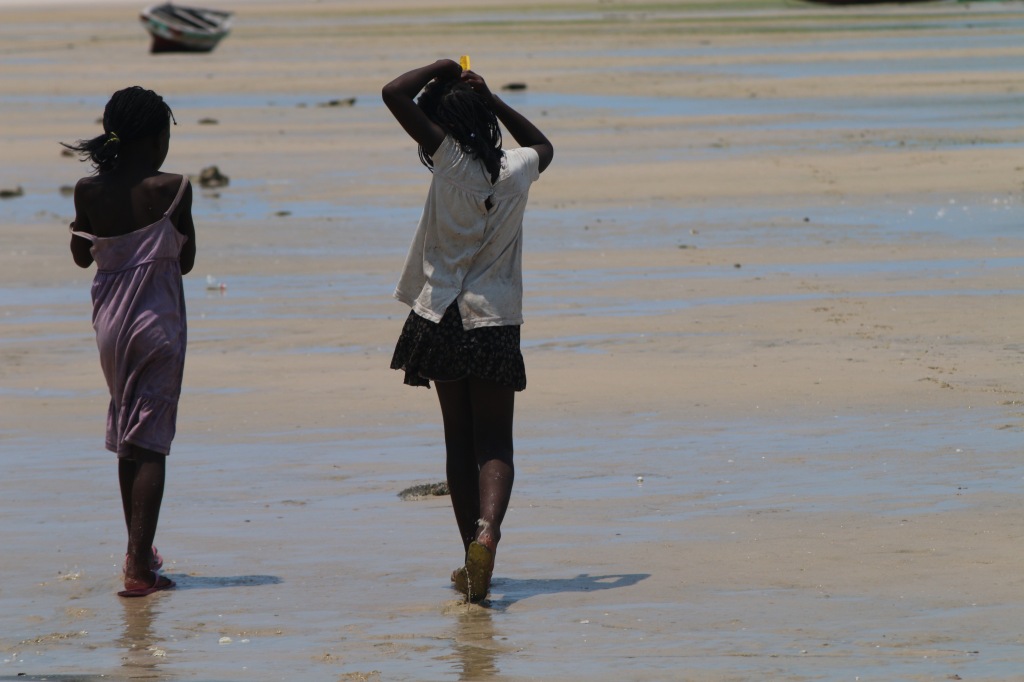 We had to work hard afterwards to find some moisturiser to help us fix our mistake of staying uncovered in the hot African sun for hours and hours. I never learn. At the end of our trip our boat captain had prepared a beautiful prawn curry and fruit platters. We had a siesta and then went snorkelling to see the most amazingly colourful creatures.

What a paradise it was for us and what hell it must be for those caught in the fighting. I always had mixed feelings about visiting such places. Do I support the oppressive local regime by going there and leaving my money in the country? Probably a little. However, would I ever even know the scale of the fighting, the hopes and fears of the people without having been there and would I be able to tell others about it? Probably not. So I am looking forward to our next trip to Mozambique. Hopefully the fighting will not take the measurements of a civil war again and the new promising president Nyusi will not go down the route of corruption and intimidation like so many of his predecessors have.

There’s your African politics lesson for the day. Until the next time!

One thought on “Back to Mozambique without the chicken bus”