This post is hopelessly late. I last went to Bangladesh in February this year, but never got round to writing about the trip.

As my second trip and a few months in my job with the Maria Cristina Foundation, this proved to be an entirely different experience from the first time as I was already familiar with the place, the kids and how things are done in Dhaka. However, the chaos in the roads will probably never cease to amaze me. I had a lot of people to meet and errands to run this trip, so I spent a lot of my time stuck in traffic trying to wriggle through endless rows of cars, buses and rickshaws while sat at the back of an auto rickshaw, which are normally driven by impatient guys especially keen on blowing the horn even though they know it doesn’t make the slightest difference.

A lot of strange things happen to blonde foreigners, who are an unusual sight in the area of Dhaka where I work. The picture below is taken at a shop next to the school the Foundation’s kids go to. I just happened to stand in front of the shop with a volunteer when this guy with a lovely combover on the right sent his son to invite us into his shop. He was so pleased to welcome us in his shop. We were offered Coca-Cola (luckily they didn’t add extra sugar this time), a seat and a lot of admiring looks. All this took place with the help of the kids you see in the photo. Without their English I would still be in that shop trying to understand what and why is happening. It turns out Bangladeshis are just as curious as anyone else would be about people that look different.

Life in the slum seems extraordinarily bleak at first. It is certainly not an easy or a pleasant life that people who are forced to live in a slum lead. But some of those people are very relatable. All they are trying to do is to make a living and look after their families. Most succeed in putting food on the table, few succeed in sending their kids to a good school instead of work, normally at a garments factory. But once one gets over the dirt, smells, chaos and deprivation, normal lives with their joys, worries and problems surface. I think it is 100% healthy and essential to see the slum-dwellers as independent, capable people and not someone to pity or feel sorry for. True, due to lack of education most of ‘them’ (I really don’t like this othering, but what can I do) will need a helping hand, a push, to struggle out of the poverty they live in now. I am and have always been of the opinion that nothing can make a stronger and longer-lasting impact on a group of people than education. 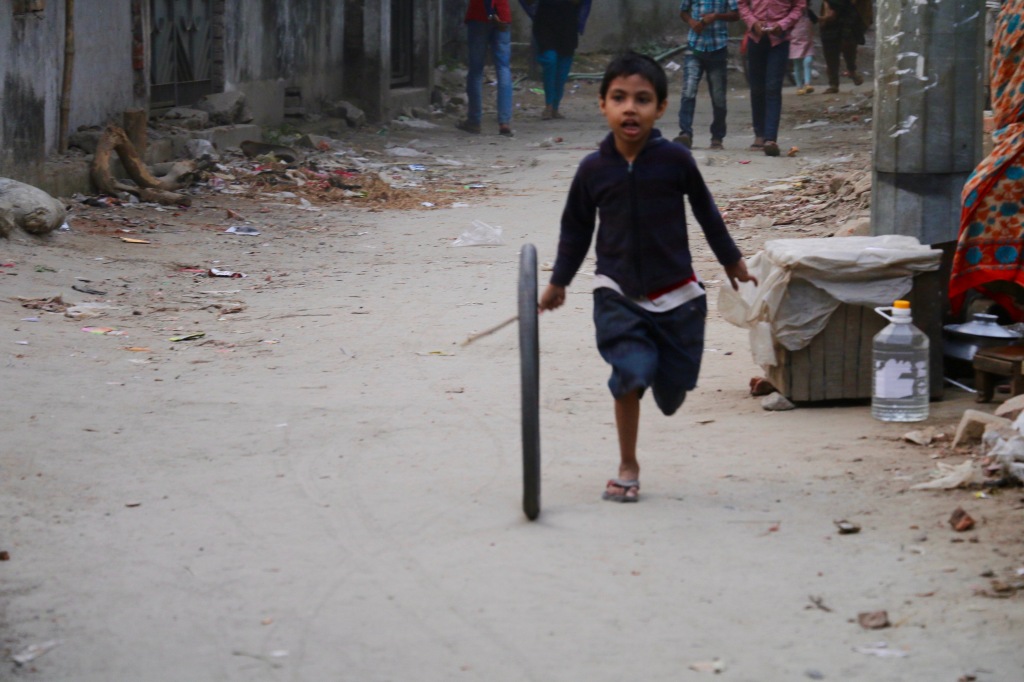 By education I do not mean merely sending kids to school. I have seen a number of NGO schools in a number of countries that are just out of control. They lack supervision, good teachers, supplies and ultimately, motivation. NGOs can keep injecting money into building more and more schools, but what’s the use if the quality of education will not make the slightest difference and girls still quit once they get into puberty? This is one of the many reasons Maria Cristina Foundation’s kids go to a private college, which is a bit more expensive, but has good teachers, excellent facilities and an environment that inspires kids to learn.

So on this trip I was determined to give some of the older students a different kind of education and introduce them to new things. Here I am with Lily and Madhobi on our way to Dhaka Art Summit (only took about 2,5 hours to go 20km!), which is one of the biggest art exhibitions in Asia. 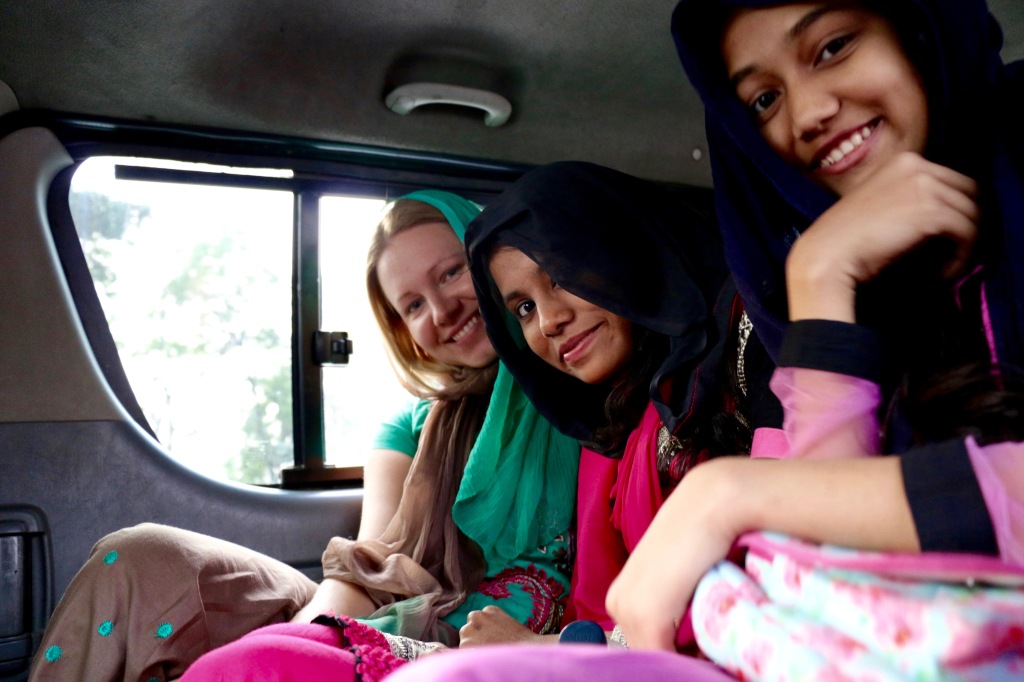 The kids had never experienced an art exhibition, let alone modern art. There were a lot of questions, which I was happy about as it all starts from a sparkle of curiosity. Obviously, we had to take many, many moments to pose for photos. 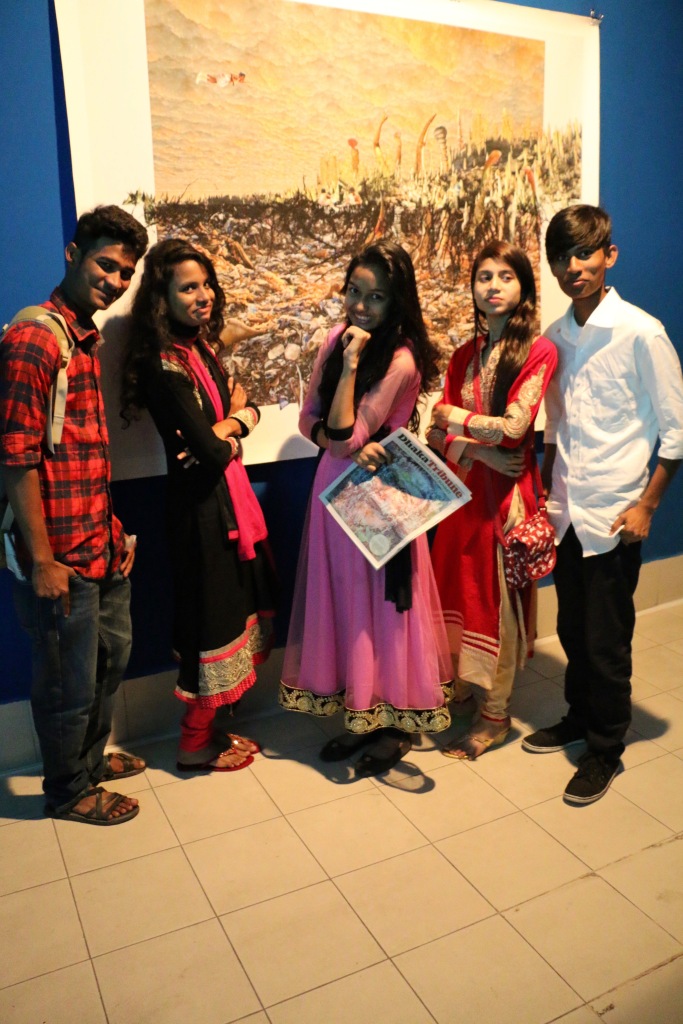 And this is the moment when these girls tried hot chocolate for the first time in their lives. Imagine that. Sadly the hot chocolate was very rubbish and we had to send it back for them to add more chocolate. 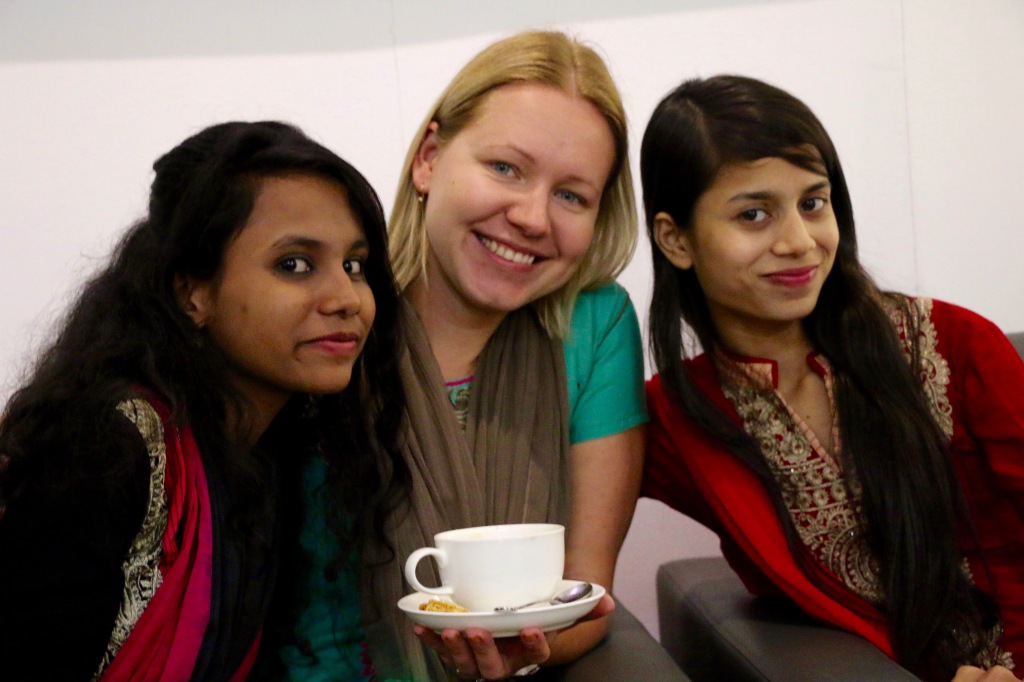 Some of the lighter traffic in Dhaka.

So obviously I went to Dhaka for work. Working for this Foundation is not straightforward in terms of responsibilities and tasks to be done. A lot of everything needs doing all the time, which is why I love it.

A school from Dubai donated their old school uniforms, so I organised all the kids that needed new clothes and distributed them. Remembering names got even more difficult after that as now they all wore the same clothes as well.

These two ladies (mother and daughter) look after me and supply endless amounts of tea and biscuits while I go about my business. 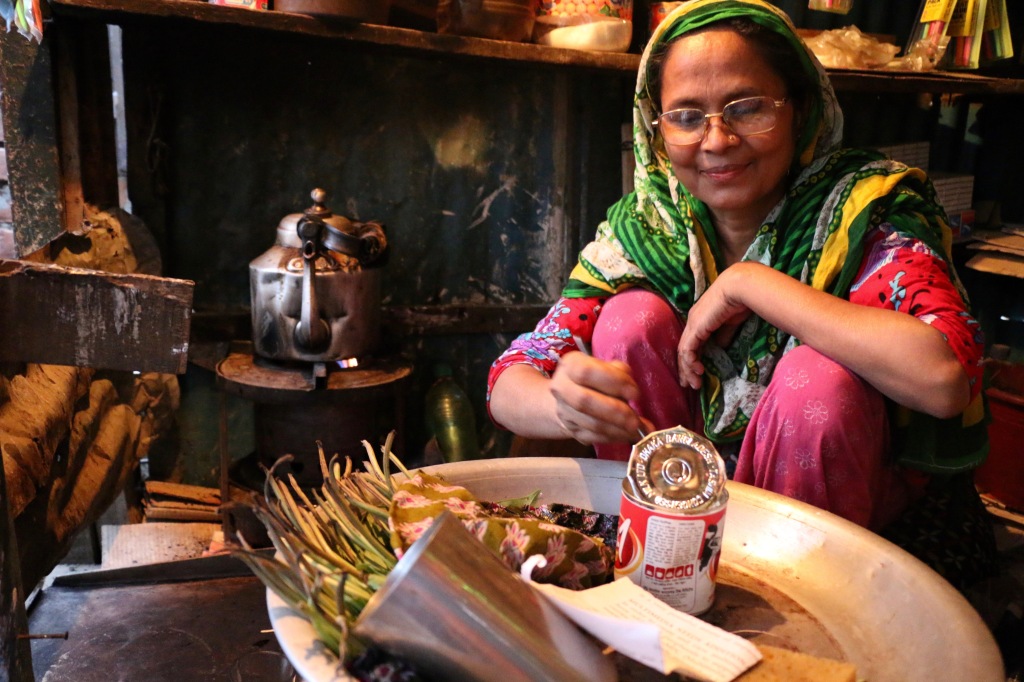 Once I had distributed the clothes, I opened my office in the community to interview older students about their future plans and to take their photos. Working in Dhaka always comes with an audience, whether I like it or not. It does get very annoying at times since I love my personal space and for the Bangladeshis that is a foreign concept. 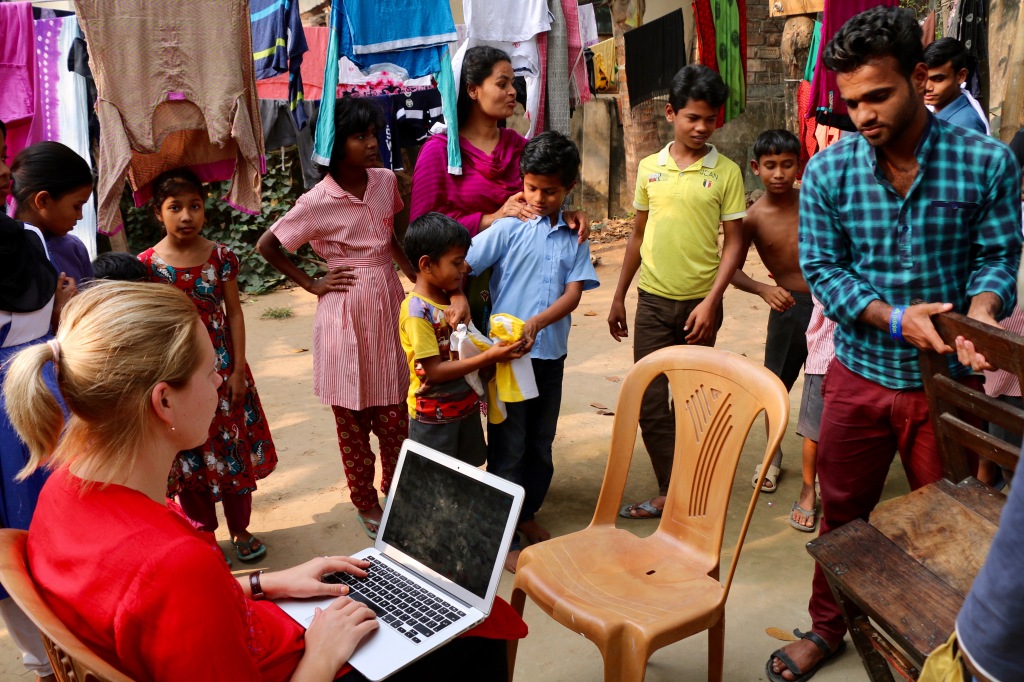 This is one of the families I visited standing outside their house and in front of their kitchen. A lot of the kitchens are outdoor, where cooking takes place over an open fire. The women squat over the pots and pans while cough-inducing chilli aromas linger around the whole community when it is lunch or dinnertime. The girl with the yellow headscarf, Kolpona, is probably one of the most talkative people I have ever met in my life. She will talk to anyone about anything, as long as she can practice her English.

These three are best friends and like hanging out together in and outside of school. I gave them Chimamanda Adichie’s “We should all be feminists” – a great read for everyone, boys and girls, old and young, feminist and not. The cultural restrictions on girls, especially amongst the less educated, remain strong. They constantly get pressurised to get married when they are over 16 years old. They constantly have to justify their desire for education and explain how this will help them in the long run. They all love music, dancing and any other normal teenage girl activities, but they hardly ever have a chance to have uncontrollable fun – they must maintain their conservative image in the community.

The Foundation has been working in the community for 11 years and a lot has changed in these attitudes already, but it will take generations to change completely, to see same value put on girls as is on boys. 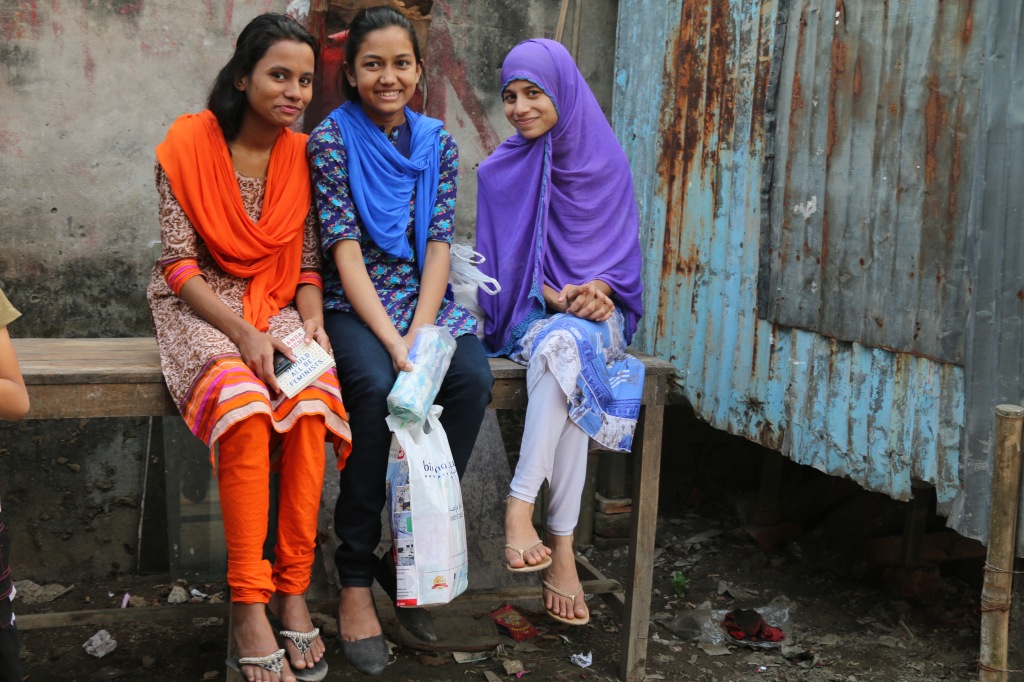 One of the many teenage girls, who works in a garments factory, working all day every day and making about 30 EUR per month. Clothes for huge brands are made in these factories, which are of questionable standards and often have fires break out, they collapse and generally have bad conditions to work in. Thus many factory workers get respiratory diseases.

This is Rohima and just a nice photo of her. 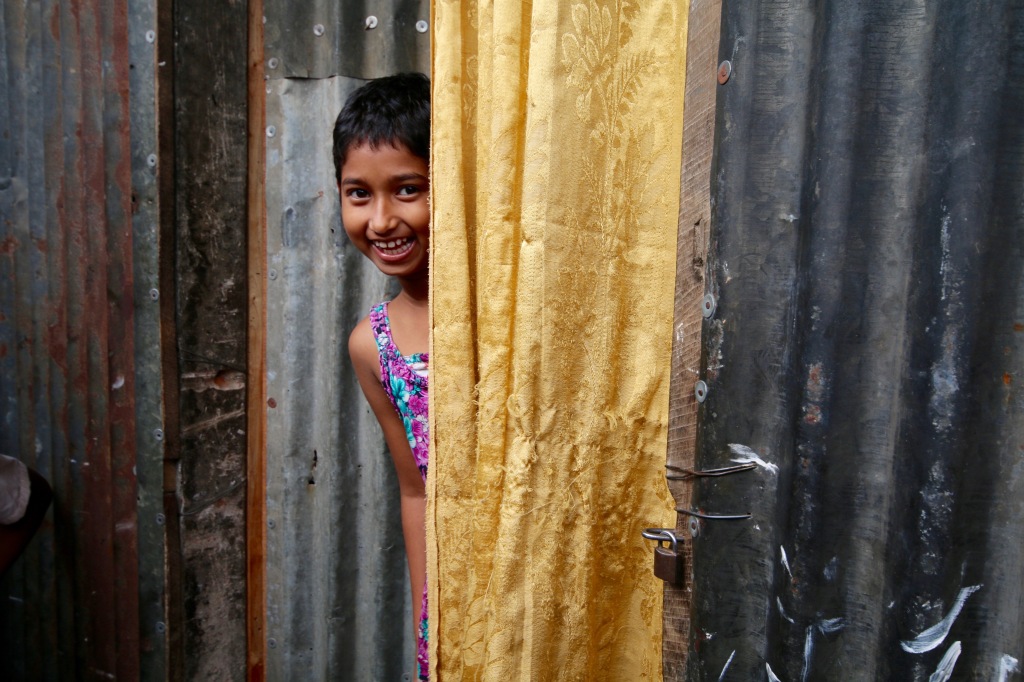 99% of my job includes the use of a computer, but things change in Dhaka. My duties extend to playing a doctor quite often. This little boy had a simple rash, which escalated into something more due to lack of medicine and hygiene. Some amazing volunteers brought medicine for him from Dubai and a difference was made within hours. This mini-clinic was opened at a tea shop and medicine administered between cups of tea.

This little girl got new school shoes, which were too big for her and which she normally wore without socks and had given her a mega blister. Again, I played the doctor, disinfected and dressed her foot while she was having a break at school. 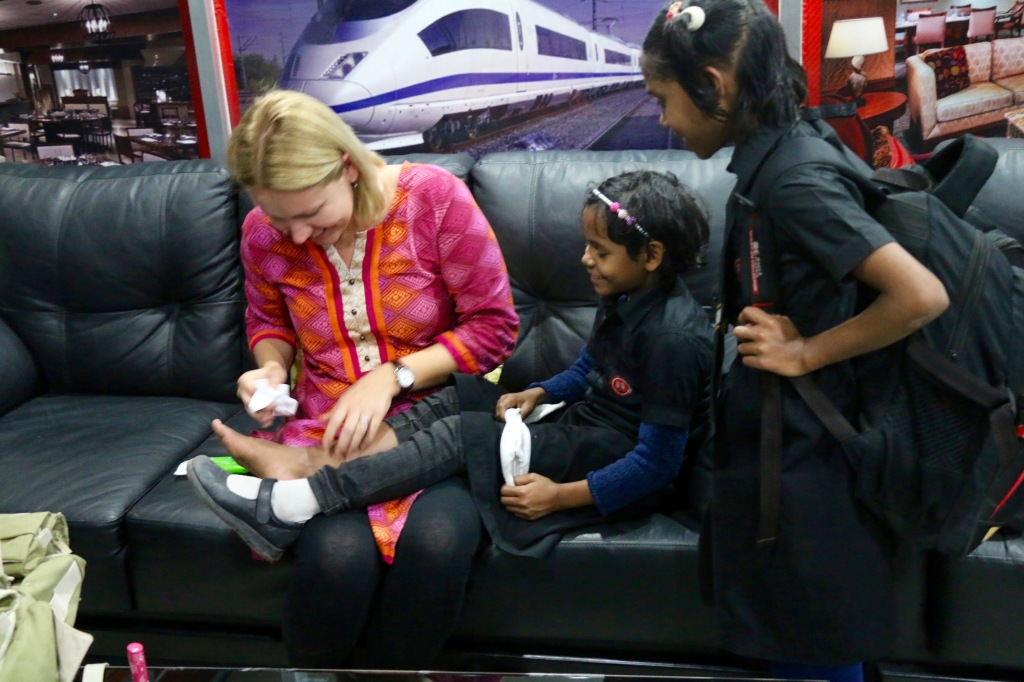 David joined me in Dhaka for a few days this time. I bought him a Bangladeshi cricket shirt, so everyone would think he is a professional cricket player. And they did. Here he is trying to very carefully get from A to B in the slum. This was in the dry season, but the water that falls during the monsoon stays a long time and is an ideal breeding ground for all sorts of disease-carrying bacteria. Some of these ponds have catfish in them, which the locals eat. Many of them get water from these bodies of water as well. We have installed a few wells in the community, but it is clearly not enough.

He also tried kite-flying, but should probably stick to cricket for now. 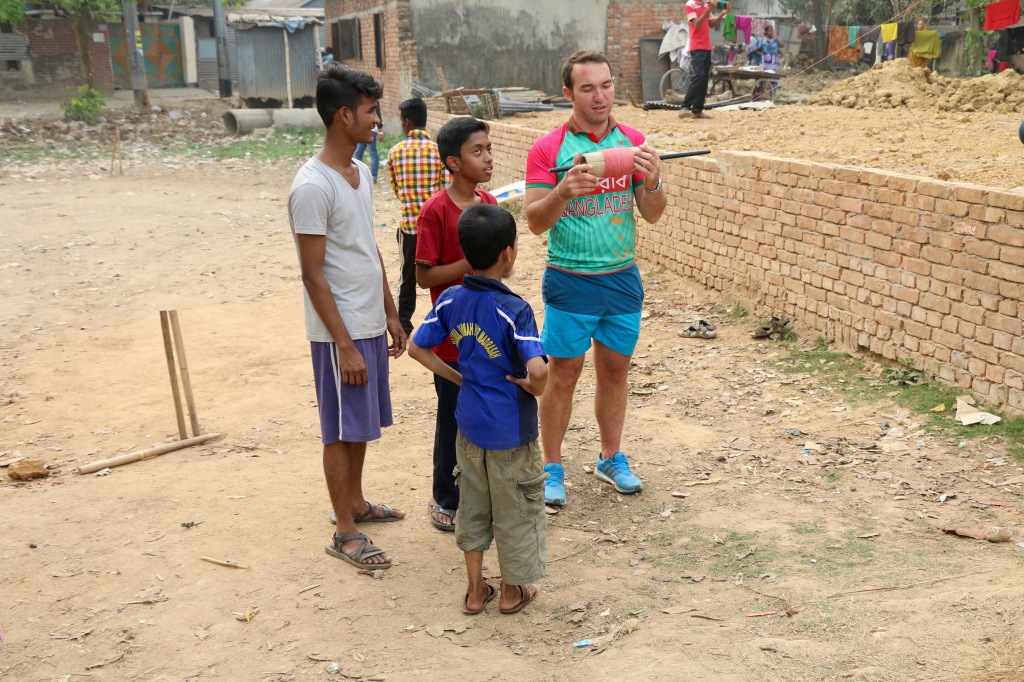 This lady fell in love with David and wanted my permission to have him stay there. I gave my permission, but for some reason David didn’t stay.

He was very popular with all the kids and enjoyed being silly with them. 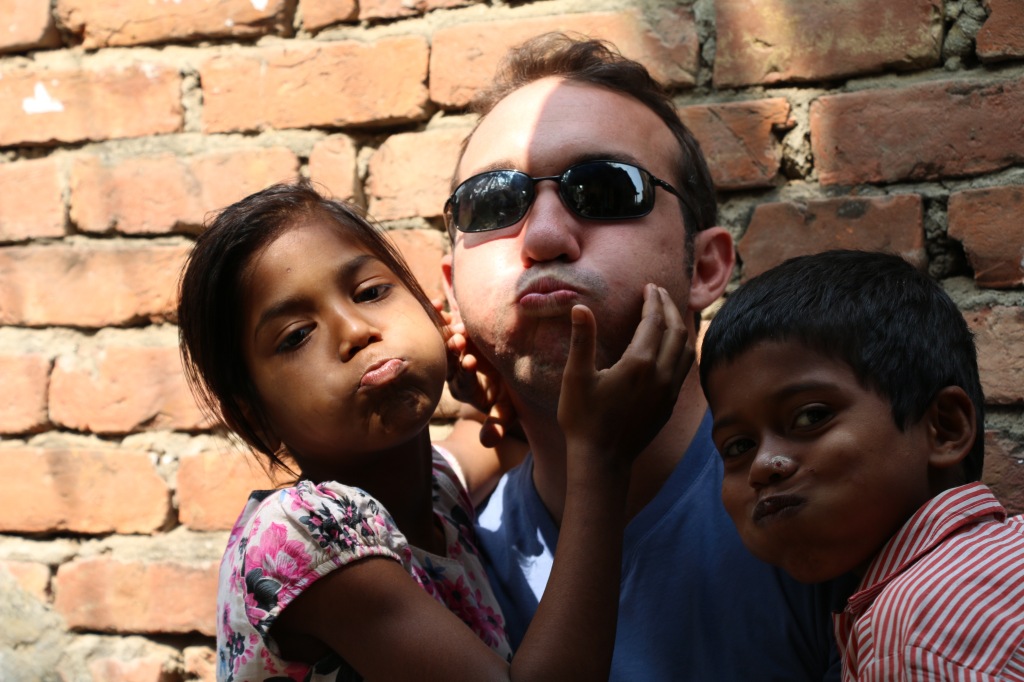 And finally, here is a little boy playing with a cleaver in the middle of the street. Never let your kids take their toys for granted!

That is all from Bangladesh for this time. I hope to return soon, but it seems unlikely for the next year or so. I still have to tell you about Mozambique and Kyrgyzstan (talk about different places), but in the meantime, tell me of your news!

Ma’salama from Dubai, which is getting colder (dropped to less than 35 degrees at the weekend! Where’s my coat?)